How To Judge When the Flash Column Should Be Replaced With A New One?

But chromatographers often encounter such problems. When should I change the column? From experience, when the number of plates of a flash column is reduced to a percentage, it can be considered that the column can no longer be used? Is it appropriate to use the number of plates as the only indicator for evaluating the quality of a column? How do you judge that a flash column is unusable in your laboratory? Hawach has provided several factors for your reference.

2. Resolution
It’s believed every chromatographer will care about resolution, which is an indicator of how well a flash column separates a specific sample. The core task of chromatography is to complete the separation of each peak. In actual work, we need to obtain narrow peaks with reasonable peak widths in order to obtain lower detection limits (this is no longer a problem, and current chromatographic columns can meet this requirement). 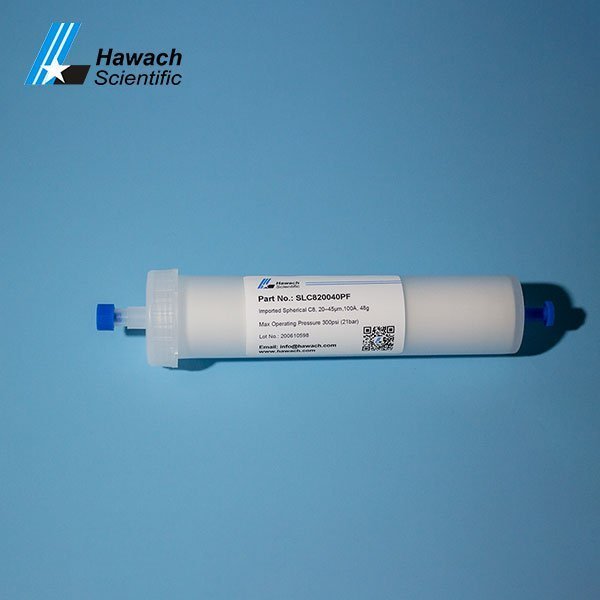 4. Mixed indicators
A better method is to use the mixed indicators of pressure, resolution, and peak shape to investigate the state of a flash column. The pressure measurement is easy. Usually, the chromatographic method we determine should meet the following requirements: the column pressure should not exceed 2500psi when using a new column, and the pressure should not exceed 3000psi under any circumstances.

Resolution is a very important indicator for us to investigate flash chromatography columns. If the two components can be separated by a baseline, there will be no problem with the quantification of the analyte. Severe peak tailing is more and requires higher resolution. For this reason, we can easily see the separation of adjacent peaks.
5. Peak tailing
Another criterion for investigating the quality of a flash column is peak tailing. Usually, there is a difference between the actual one and the one reported. It is worth mentioning that the compounds containing nitrogen atoms are very tightly bound to the free silanols on the silica backbone. As the column is used longer, the bonding phase will be lost and tailing will become more serious.

However, changes in tailing situations are not as immediately visible as changes in resolution. Based on this, determine the upper limit of a tailing factor, such as the United States Pharmacopoeia stipulates that the tailing factor does not exceed 1.8.

Usually, in the process of developing an analytical method, we will test several chromatographic columns and analyze enough actual samples so that you know what happens when the separation becomes poor. If the operator tightens the system suitability requirements at the beginning, it is very difficult to relax this requirement after method certification. It’s suggested to perform a system suitability study before sample analysis, in order to make sure the chromatographic method meets the requirements. For more questions, welcome to visit hawach.com and contact Hawach team by email(info@hawach.com) or phone (+86-29-89284429) directly.